It was mid of a day and I was travelling to D N Nagar and I got down from a cab one of a street’s of Andheri link road. A big there was going on side by road and a lot of construction workers are doing their job. To my eagerness, that made me to question of a strange working on a construction site. He was busy on breaking stones. I asked him. Hey! What are doing? He  stopped his work and looked straight in to my face and said! Can’t you see?! Yeah, of course, I could see what he was doing, he replied me back “I’m breaking stones” and then I replied OK. Walking a little further I observed an other person doing he same work, Breaking stones. I asked him intentionally the same question. What are you doing! He stopped what ever he was doing and looked at the half constructed building and said! “Oh well! I’m helping in building probably not the tallest, but best place to live”.

I hope now my story title got justified, What I meant to say by those two guys!

Think about it, what this two construction labours said. They both are paid alike and both are doing same job but one saw what he was doing and took it as a burden and other know what he was doing and why he was doing as well. Apply this analogy at your workplace. How do your colleagues, associates and juniors in the organisation perceive their roles? As a mere stone breakers or as the builders of the best place to live.

Does your front-line salesperson see his role as just a “sale rep”? or does he pride himself on being part of a team that is aiming to bring the best in the business? 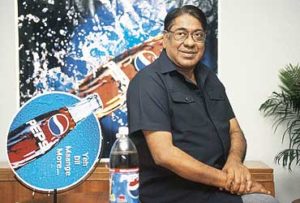 P.M.Sinha (popularly known as “Suman”), the former CEO of PepsiCo India, was a master at such vision sharing. He created what he called as an up-side down the organisation. And his favourite slide in any presentation was the organisation Chart, which showed the front-line salesmen right on top, with rest of the organisation working under them and the CEO was right at the bottom of that inverted pyramid, his role to support and back the entire organisation.

There are other practices as well that helped him to foster this culture of togetherness. There were no bosses or “sirs”, Suman was called as Suman by the entire team. Everyone wore identical shirts to work, with the Pepsi logo emblazoned on the pockets, right across their hearts. In every visit to the market, in every conference, Suman made sure that he projected his front-liners as his heroes. It isn’t surprising that Suman succeeded in creating a first-rate sales team and amazing work atmosphere to work.

Every work needs certain steps to follow and a process to reach final step, you need to clear your schooling first to reach your graduation. Similarly, you need to clear your low level position to reach higher level. That way you know whom to prefer to undertake what kind of activity and how to manage few concepts like job assignment, quality evaluation and product management and companies vision and goals. You can’t get into top positions until you clear your baby steps and levels to grow and work.

So how you and your colleagues in the organisation perceive your roles? As stone breakers? Or as builders?