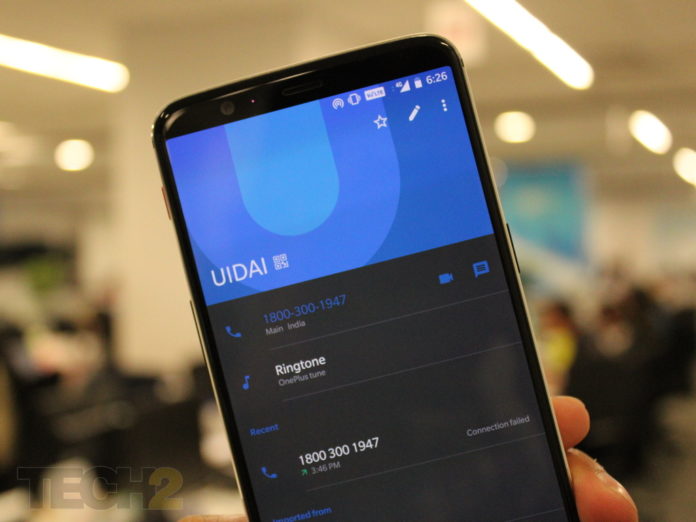 After multiple tweets and buzz on social media, almost every Indian resident was boggled by a number saved in their devices’ contact list that they never claimed to have saved. This created much of frenzy and left billions, skeptical on how the number mysteriously appeared in their phones.
The number 1800 300 1947 has been saved under the name UIDAI, in the android devices of the citizens of India. Majorly in Android devices, this was found. The citizens initially thought that the update was made in the devices who’s phone numbers has been linked to their Aadhaar. Many tweets suggested this to be UIDAI’s another attack on the citizen’s privacy by infringing into their personal handsets. But this contact saw its place even in unlinked number devices, rubbishing of the above assumption.
The big bewildering question now popped in every citizen’s brain. How did it end up in our devices when neither was it saved manually not is the number linked with Aadhar?
Many sources and news agencies approached huge telecom services like Vodafone and Bharti Airtel who denied to have added this contact number along with their other default phone numbers in the contacts. Also, many mobile phone manufacturing companies rebuffed to have added any such number.
Soon to uncover, Google came up to take the responsibility of this incorporation in its Android devices. It claimed to have coded it through the setup wizards in android phones, long back in 2014. This put to rest, all the panic waves of infringement spreading through social media. It further clarified that the number was present since 2014 and carried along to all the further devices changed by the user, as it finds it fixed place in the contact list.
Google pacified the citizen as it’s official spokesperson assured of no illegal access being made by the company in the user’s personal android handsets.
Countable iOS users on whose device, the UIDAI’s number was also preloaded, remained puzzled. The answer was predictable on realizing the users might have accounts on Gmail.
But the explanation tweets of UIDAI compelled us to scratch our brains once again as it said that the toll-free number 1800-300-1947 appearing in people’s contacts lists was outdated and invalid. This technically becomes absurd for UIDAI to ask anybody to include an official number from its side. The official helpline number now is 1947 from past two years, it stated in its tweet lately and added that ‘some vested interest is trying to create unwarranted confusion in public.
Thus this remains a thing of fret and perplex as to how the number, that isn’t even valid and unadvised to be added by UIDAI, lands on the Indian citizen’s personal phone.