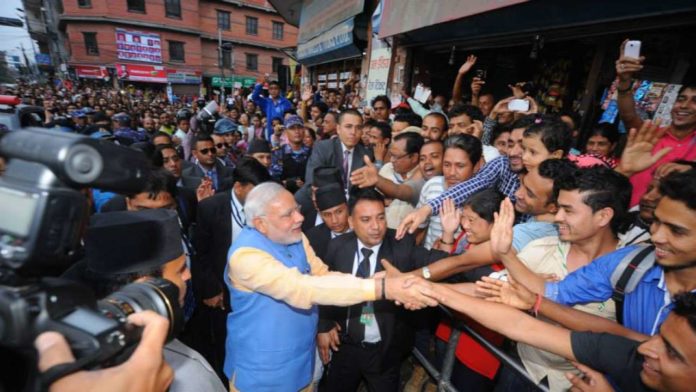 “Who is your favourite leader?”, The teacher asked the students, a name echoed the walls of the classroom “NARENDRA MODI”. Not an unusual answer since 2014 elections. One of the major population categories looking up for “Acche din” was the Indian youth who had cognize to the corrupt face of Congress back then. Indeed a man of 60 was cool enough to have fans at the age of 16. In his address on 1st January 2018, he woke us to the fact that all those born in the 21st century were going to be 18 this year, hence urging them to become new voters and the moulders of ‘New India’.

As an effort from BJP’s side to empower youth, they have promised to organise a mock parliamentary session with people from the age group of 18 to 25 regarding discussions for the development of a mass. From coming live to address the crowd to conducting polls on social media, he knew how to connect with youth as social media was probably the best tool to do it. BJP has been conducting many events to strengthen its youth base. As per an article by THE HINDUSTAN TIMES, The Prime Minister said the youth should be made “ambassadors” of the Union government’s public welfare works and good governance. BJP played smart with the fact that youngsters depend on mobile phones more than on newspapers and TV channels to get information and stressed on the need to use this medium of communication to tap them.

A poll was conducted by a news app In short in collaboration with marketing agency Ipsos. It said that out of the 63,141 users who responded to the question on bringing BJP to power again, 70 per cent voted “yes”. The variation of the attributes of a Prime minister has been so avid from Dr.Manmohan Singh to PM Narendra Modi that young generation now knows how a global ambassador of a country should be like. What makes people mimic Mr.Narendra Modi is his style of speaking. With his favourite term “Mitroon” to his style, it’s all becoming a trend. We respect people’s qualification and knowledge but citizens prefer a bold, vibrant leader like him, rather than the one we had before.

Now for me, BJP is honestly all about Mr.Narendra Modi, but talking of BJP as a team, with programmes like Swatch Bharat Abhiyan and digital India and make in India, BJP in power could win a lot of appreciation especially from youth. With all those promises and mastering the use of advertising, BJP had all young fingers voting for them. Youth making optimum use of information technology and the Bharatiya Janata Yuva Morcha has also decided to make maximum use of the internet, social media and mobile applications knowing that India has now the fastest internet traffic growth and to be the youngest country by 2020 with 65% of the young population. Modi launched an array of skill development initiatives for the country’s youth, as per economic times as on 19th December 2016, and forged for a strategic partnership with various industries that will train and employ approximate 4 lakh youth over the next 3 years.

BJP further backed young entrepreneurs by his Mudra mission and initiatives of smart cities. Which young citizen wouldn’t want a life with 24/7 internet connection and luxury amenities available. To be honest, according to me, people were so fed up of newspapers flooding with scams by ministers of Congress party for 10 years that now Congress was not even an option, and BJP came as the Messiah for the common man with no major scams in at least first years term of its ruling. Ain’t sure with the middle-aged and senior citizens of the country but young India and also a portion of literate and smart citizens see a ray of hope in BJP to handle a dicey Country like India.

With all the major initiatives taken towards the young population, PM Narendra Modi, the man whose influence on youth can be undeniable seen with his 41 million followers on Twitter, talking like the Martin Luther King Jr. of India “I have a dream.” , His dream of young India, and young India’s hand in doubling the development of India. Indeed lead by him, BJP could make its place well in the young voter’s hearts and thus the Prime minister seat with the single majority today. BJP’s two targets – their election victory and country’s development with a single arrow called THE YOUTH.