With the evening at 7:00pm, she looked like the dying sun, as tears rolled down her swollen, beaten cheeks under her eyes. Breathing heavy, she walked inside the police station with another lady holding her strong by her shoulders or she would have had collapsed. Worried with the lady’s condition, as scars peeped through her torn sleeves, and muddy knees, the lady constables rushed to help them to the desk.

The police inspector exchanged a pitiful glance, he knew the case, he bought her a glass of water and made sure the shivering girl was calmed enough to speak up. He knew she wasn’t ready for interrogation yet so he turned towards the lady who had accompanied her.

“This would be the fourth similar case for the day. What the hell is wrong with the city.”, His eyes lowered in disgrace.

“It’s like the third stage cancer to our country, no solution, no hopes of improvement.” The accompanist sighed.

After sharing a few words with her, the inspector now began to dig the case.

“Lady, may I know your name?” He enquired to the victim.

“Don’t be scared, you are in the police station and you are absolutely safe here.”

The victim, still couldn’t voice herself as her own cries wouldn’t leave her ears. “Leave me please, don’t do this to me, please leave me .” She began protesting.

“You are in the police station beta. Relax; I can understand your delima. I have a daughter too. Forget you are talking to a policeman, talk to me as your father. C’mon you have to open up or we won’t be a able to catch those monster. If you help us in this investigation, I promise I will punish them in front of you.” He tried hard to get an answer.

“Promise! Tell me, who were they and how many?” He began his questions.

All the heads in the police station turned around with a wave of shock.

“This big Gang rape!” He was horrified. 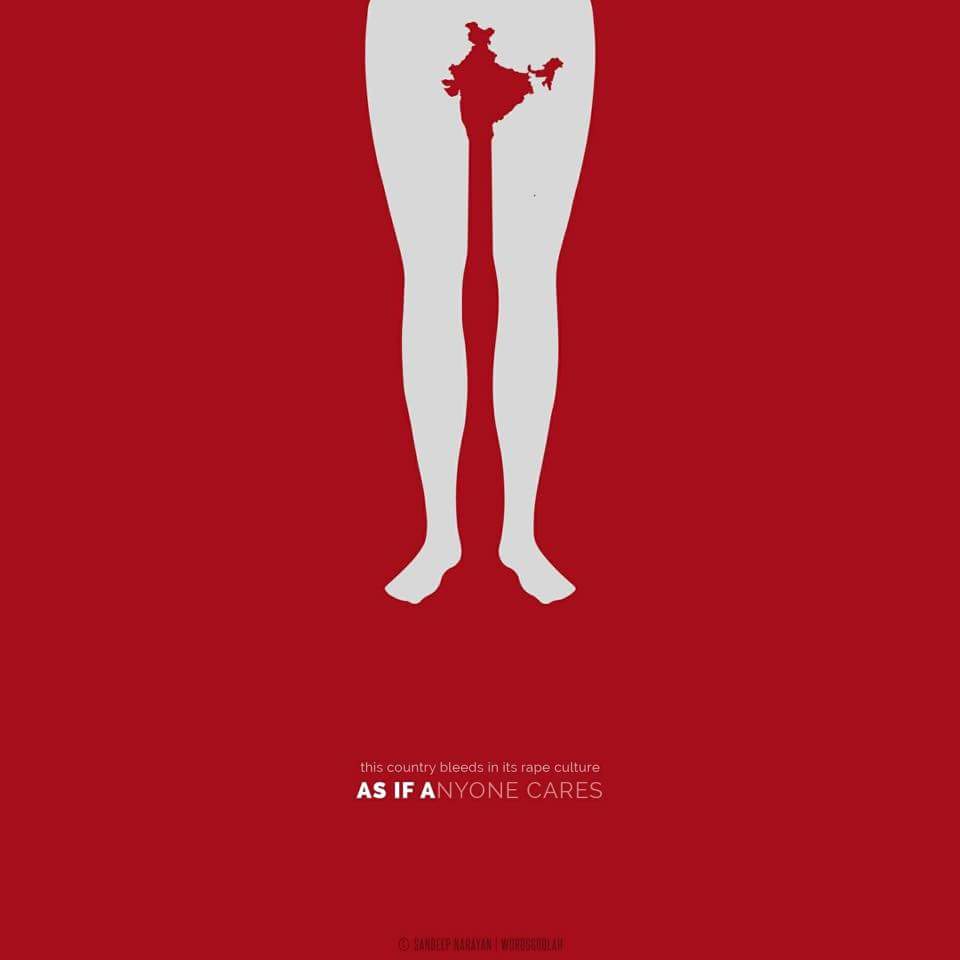 “Not completely, but yes.” She cut him prompt.

“There were two men, who began to pull my dupatta and outraged my modesty, a few
on-lookers who walked past me getting tortured like just another common scene, a few young men who had muscles built only for their Instagram selfies, a few traffic police who thought their duty was only on roads and not behind the bushes beside it, a few civilians who wanted to keep ‘police station ke chakkar‘ at bay, and a few heartless women who probably forgot they were a woman too.”

She dropped everyone to pin drop silence except for her tired heavy inhales.

The entire police station became mum; the silence was of realization, and the realization of brutal realities of society they dwelled in.

The inspector was puzzled, who all to put behind the bars, those young men? Those civilians? Those ladies?

Yes, it was only two men who committed the crime, but a dozen others who let it happen. It was a gang rape. Yes, a gang rape, by the on-lookers, by the ignorant, by the cowards, by the society.

With incidents like Kathua rape case, let the main rapist be one or more, it’s a gang rape, a mass exploitation by society, religion and politics. The third-stage cancer, you can conclude it, irreparable, wrecking and worsening more each day.

We are Back!!! BMMGuru is Back with Exciting Content