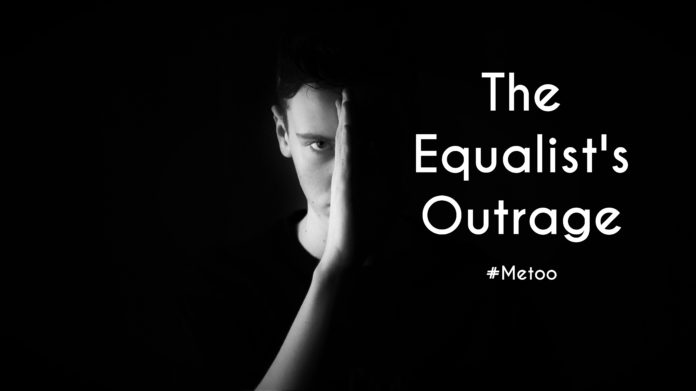 Flip through newspaper pages and you’ll find another #metoo victim making the news. Flying from Hollywood, #metoo took over to unveil some alleged molesters also from the industry of Bollywood.

The reputation of many Directors, Producers, Photographers, Music composers and ofcourse the casting directors became a history. This roar didn’t remain within the walls of glamour industry, but spread like a forest fire, as many women (well few men too, but who really cares 😐 ) even outside it revealed of being a sexual abuse victim by posting with #metoo on their social media.

I am glad, this trend awarded women the guts to speak up. This was when I was cognized with the intensity of the issue when that day, in a lecture, our professor asked- “Is there any girl in the class who hasn’t faced any kind of sexual molestation?” And there was literally no hands raised.

Thus #metoo got women like- Hell yes! More power to women! #womenempowerment #womensafety #justicetowomen. But wait, what about justice to men accused wrongly?

The #metoo has undeniably raged a war against exploiters punishing them with their exploitation. But let’s not confuse, that the fight, is with abusers, rapist, molesters and NOT with the entire breed of men. Constructing concrete laws for the safety of women is an appreciable effort from the state but as every coin has two sides, so does this. This us because, these laws are now, sourcing as Blackmailing, defamation and Publicity techniques by some unholy women.

I am not claiming, but there might be a few #metoo cases that may not even be one, but we preceive it as truth without a court trial because, who would point a doubtful finger on the women, who’s side has been so sensetivised already. (Not sure if there’s any word as “sensetivised” but, you get me nh) . Well the sad reality is, that the authentic motive of feminism was to lift up women and equalize to the position of men, but now it’s more about lifting them up, but, by pulling men down.

This entire point knocked me when I was playing garba with my friends and there was a new girl who joined in, and I remember a male friend asking me to swap places because he was worried that if he touched her bymistake while dancing, she would tag him with a #metoo. Well amidst the frolics with friends, that was taken much as a joke but I was honestly divulged to the fact that how #metoo was troubling truly gentlemen around me.

There are fathers who treat their daughters like princesses, there is the husband that who treat their wife’s like queens, there are brothers and gentlemanly male friends who stand against anybody who dares to eye on you. I am a woman and I know the filth of being molested but I won’t tolerate any illusioned woman accuse or look with an eye of disgust to any of these men above without surety or proof.

Being insecure about your safety is naturally occurring to every woman now and it’s not even their fault, the world is really becoming a bad place. But the simple message is that- sometimes women may also mistake that touch, and if not, they might even mistake the man. Just because it’s been happening too often doesn’t make every touch that you experience, always that of molesters.

Your one wrong estimation, your one wrong accusation can shatter the life of a decent man. Undoubtedly, one must fight their molesters, but fight right, without taking an undue advantage of the female sympathizing law and society. Don’t typecast or judge every man’s character as same. Don’t commonize, segregate the filth and the fine. Dump the filth, dignify the fine. The value of rare is always high and the few good gentlemen are just like the diamonds hidden within a mass of black rocks.

On the uncelebrated International Men’s Day, I would want to redeem the honor to all the men who remained true to the morals of respecting other genders amidst the large percentage of immoral once. Because #NotAllMen are abusers, #NotAllMen are rapist, #NotAllMen are same.