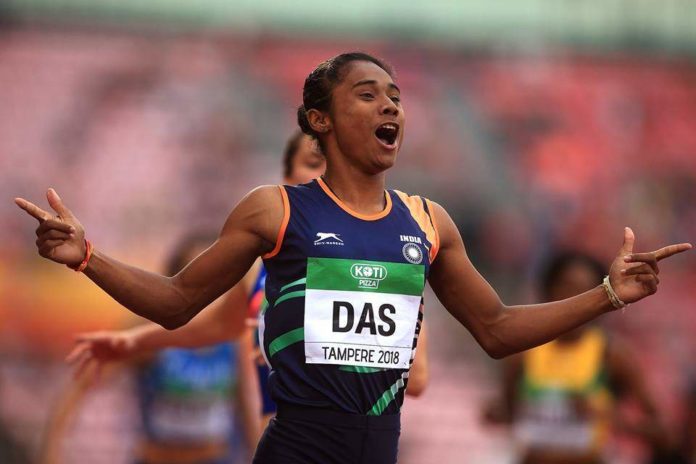 India rose on the morning of 14th July to find another inspiration to look up at. Every Indian rejoiced to the news of the young teenage sprinter, flaunting her gold medal at the 400m race at the IAAF World U-20 meet in Finland. Standing tallest on the rank podium, Das becomes the achiever of India’s first-ever gold at a world track event.

From a little corner of north-east, this 18 year old sport sensation hails from Nagaon, Assam. Born to rice farmer parents, Ronjit Das and Jonali Das, Hima is the eldest of her five siblings and certainly the eldest in obstinacy. Breaking social norms, Hima would chase the football in splashing mud along with the boys of getting vicinity playing in her village.

Apart from a sports hero, Hima is a strong and bold girl who omitted country liquor supply in her village and fought fiercely with other illegal and social issues crossing paths of her Village. Thanks to Shamshul Sheikh who saw a world-class athlete in Das while her speed caught his eye in a football match in her school Jawahar Navodaya Vidyalaya. She was blessed with many strong pillars who contributed immensely to this success, importantly, Nipon Das,an athletics coach with a Directorate of Sports and Youth Welfare, for her amazing training and a local doctor, Pratul Sharma, who raised money for her.

Conquering this title in 51.46 seconds, Hima has also been victorious, standing 6th in Commonwealth games 2018, and won the federation cup as well. But undoubtedly, this win called for a major party. Her parents had never been that proud and contend for sending their young girl away from their village. Excited and astounded at the same time, Hima utters her victory sentence-”While you all were sleeping, I rocked the world.” Certainly, this makes Hima, a star. This young spinSTAR, fondly called THE DHING EXPRESS back in her village, added to the list of those sports champion women who, despite a hundred odds coming along their gender, had brought glory to the country, a new role model to idolize.

To read more such interesting articles, subscribe to our weekly magazine: https://www.magzter.com/IN/BMMGuru-Media/BMMGuru-Weekly/Entertainment/