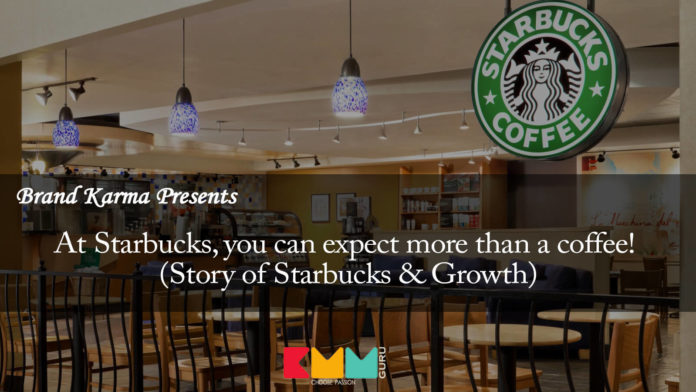 Hi reader! we are here with our new series of Brand Karma, a Brand is where it stands for in the market as per its smart work and understand and profiling its consumers. Just Like Starbucks, they understood their consumer’s style of thinking & irrespective of competition they stood first and classic and its been a routine to a lot of us to go Starbucks and get a cup of coffee to start a day and here is the story of how it all started. As it’s a big story we are making it into two parts. Link to the second part is at the end of this article.

It’s really fascinating that to be in such a place with the perfect amount of lighting, music and atmosphere that calms me and helps recreate myself and in such a place a nice double cream Frappuccino in my hand and nice fragrance of nicely blend coffee beans in the room  makes me feel amazed and this magic happens for me only in Starbucks.

Starbucks gives customers what it calls a THIRD place – a place away from home and away from work.

Look at the shift in the culture of coffee and Tea markets in last decade there is a massive amount of increased consumption in the world and now about 10.2lbs in Per capita consumption of coffee (green beans) in the United States. And there is around 9.972 million metric tons of coffee production all around the world. Starbucks one of giant coffee & tea supplier and retail seller chain has a major lead in the market around 39.8% market share in North America.  Such a huge company with a major share in the market started just as a small coffee shop which sold freshly roasted coffee beans.

This all started by three original founders of Starbucks named Jerry Baldwin, Zev Siegl, and Gordon Bowker, and that original first Starbucks founded in 1971 as a single store near Seattle. Starbucks initially sold freshly roasted gourmet coffee beans as well as teas, spices and various coffee-making accessories. After a year they had their started second store in Seattle’s University Village which is opened in November 1972. They were growing very slow.

They founded Starbucks not as a place to drink freshly brewed coffee, but as a place to buy freshly roasted beans. At 1982 Howard Schultz saw demand had grown sufficiently by decade’s time that made him curious and he joined Starbucks as director of retail operations and marketing and Starbucks started providing coffee to restaurants and espresso bars.

After a year Howard went to Milan, Italy for a business trip and saw the experienced the cultural awakening idea that would give Starbucks its destiny. In Piazza del Duomo’s a city in Florence Italy, many coffee bars, all of them serving high-grade espresso, all of them providing public meeting places for Milanese society. This question hit Schultz, why couldn’t American cities have the same thing? And if they could, why couldn’t they serve coffee made with Starbucks-roasted beans?

He soon came back and spoke to Starbucks’s founders about this idea what he just saw growing trend in Italy and he was unable to convince Starbucks’ founders about the concept as novel as coffee bars in Seattle. He left the company in 1985 & the next year he opened his own coffee bar named “Il Giornale”. Two years later to it, he got enough investors & investment to purchase Starbucks outright, which put him in a place, as CEO first to Seattle, then the United States, then the world.

The growth of Starbucks around the world.

Once Howard became the CEO, then there was no looking back. There was a positive upward side growth in graph and Starbucks was expanding its stores all around North America. In 1990 Starbucks expanded its headquarters in Seattle. And Howard unveiled the Starbucks mission statement. At that time they have 84 stores all around North America. And It’s later become the first privately owned U.S. company to offer a stock option program that includes part-time employees & it opened its first licensed airport store at Seattle’s Sea-Tac International Airport and then it started its chain on international airports in all around the work. They started their IPO at 1992.  The iconic Frappuccino & blended beverages begin serving from 1995.

Soon they opened their chain stores in Japan, Singapore, Philippines, England, Malaysia, New Zealand, Taiwan, and Thailand. They started their first Starbucks card in 2001 and they started Wi-Fi in all their stories from 2002. Then they increased on growing their stores and sales in different countries and continents as well as they were working on innovating their store for a better customer experience and added many new iconic beverages later in 2000’s. Recently in an all committee meet Howard Schultz, Chairman of Starbucks gave the new mission statement.

“To inspire and nurture the human spirit – one person, one cup and one neighborhood at a time.”

Brand karma brings out some amazing brand stories with some never heard facts before and brands that made our day so easy. Stay tuned for updates and subscribe to us. You will get a notification on all our new posts.