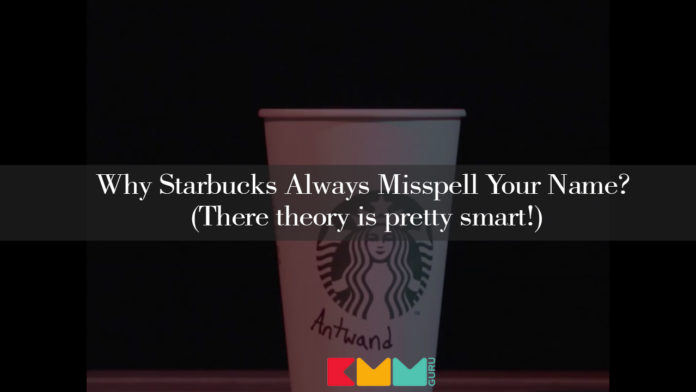 Think of it, we been to Starbucks many times and all the time we never got our name Spelled correctly. Have you thought why?

What if Starbucks is misspelling your name on purpose?

There are many theories to prove this behavior. However, the self-described “creative weirdos” at YouTube channel Super Deluxe have a conspiracy theory that actually makes a lot of sense.

Think about it,. Starbucks is the largest coffee chain in the world. Meaning that each year, millions of people all around the globe have their names misspelled on cups of Starbucks coffee. They take pictures of their butchered names and post them on Facebook, Instagram wherever. And what do all these pictures have in common? Two things, a misspelled name, and that familiar green Siren, staring at you with her all-knowing gaze. That’s right sheeple, you’ve been giving Starbucks free advertising for years.

Here is the video explaining the theory,

A video by Super Deluxe concludes by saying they of course don’t know if the theory is true…but what if it is?

In the other hand lot of comedians made parody about the reason behind this misspelled names. This is one of them!

And, a website called “What’s My Starbucks Name” parodies the spelling challenges faced by baristas with a fun name-generating game.

The site is the brainchild of Justin Hook, a writer for the TV show “Bob’s Burgers” and creator of the website “Google Feud.” Using previous Starbucks “fails,” a.k.a. misspelled names, the site generates the incorrect spelling of your name for you. Try it for yourself!

But anyways, there are many thing in life to take care of and many issues in world happening now which needs our attention. But, it would be better if my name would have just spelled correct as Nikhil than Nikil, Nikhul, Nikal, Nichol, Nabil or all the permutation and combinations making it totally absurd.

Update: We are coming up new series of Brand Karma, a Brand is where it stands for in the market as per its smart work and understand and profiling its consumers. Like Starbucks, they understood their consumers style of thinking and made a silly mistake as a world wide marketing technique and in the same way we bring out some amazing brand stories with some never heard facts about they. Stay tuned.