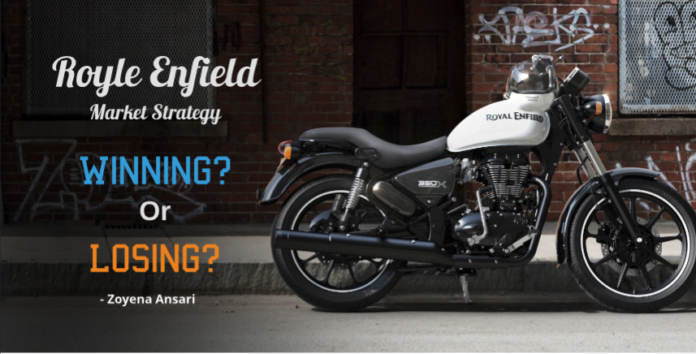 The Indian motorcycle manufacturing brand, Royal Enfield is more than 100 years old and has been in the country since 1949.

Bought over by Eicher Motors Limited in 1994, it is still in production even after facing a loss of Rs. 20 crore and being on the edge of a shutdown in 2000.

The company makes the Royal Enfield Bullet and other single-cylinder motorcycles with the Bullet model enjoying the longest motorcycle production run of all time.

The company has set in place a new thinking paradigm which involves a shift from the traditional B2B to the more contemporary B2C space, which involves transiting from a manufacturing mindset to being more consumer-driven.

With the engine being a major problem, by 2010, all Royal Enfield models had begun to use the new engine which had 30 per cent fewer parts and produced 30 per cent more power than the old, with better fuel efficiency.

As the quality issues were addressed, the management focused on improving the customer’s experience of buying and owning the brand. To improve the sales experience, Royal Enfield improved the look of the dealer outlets as well.

The company now faces challenges from iconic global brands such as Harley-Davidson which has entered the Indian market. Making their bikes affordable, Royal Enfield is somewhat losing their charm in the market as the riches used to buy it as a  luxury.

Even though the company is facing problems,  the brand still commands a loyal following. From their bikes being too heavy and difficult to maintain to not compromising their product’s individuality, the company has come too far.

The strong pricing of the brand with improved operating margins rapidly increased the valuation of the company.  Even though the price of the bullet were higher than that of the low powered Japanese motorcycle brand sold in India but the brand was still cheaper than the major global brands.

It is very heavy, tough to drive and thus remains elusive to the very few ‘men’ which can wield it.