It was Thursday night, and a night owl like me had just finished another TV series, before going to sleep I decided to have one quick scroll through my Facebook Newsfeed, I signed in, and there it was dreadful news, which left an empty space in my heart….. ‘Chester Bennington has left us forever’

I was stunned, I read that line again and again, as my mind would not accept what I was reading, but after what seemed like millionth read, the truth however hard had to be accepted.

And with the truth, came thousands of old memories, which where refreshed. It seemed that only yesterday his voice was blaring through my earphones, comforting my anxiety, voicing my anger and of course keeping me company in countless sleepless nights. His songs and I go way back; I still remember trying to sing ‘Numb’ in same shrill, high-pitched voice. And the lyrics, Ah! If heard carefully they will get to you just like it had gotten me.

I have always believed that if a broken, frustrated, depressed heart would have a voice, it would closely resembles Chester’s, and I’m sure not many would disagree as one or the other time, we all would have found an unnatural comfort in his words.

And it aches to believe that a person whose voice had comforted so many people could find a voice to comfort himself through his tough times. Yes, that’s the part of this tragedy which I had found most disturbing.That a man with over a million fans across the globe in the end felt unheard.

Well isn’t that the case in our world nowadays, we are so much involved in living our lives and telling our stories to the world that we have forgotten how to listen. It is one of major flaws in our social lives that we are have encouraged so much small talks, that we could discuss about stuff which would not be that important in the long run with our so called ‘Social Circle’ but when it comes to talk about deeper thoughts, feelings, we are left searching for a real connection.

And that’s one of the reasons of depression, lack of real connections, make people accustomed to the practice of shutting themselves up, which is capable of wreaking havoc inside them. 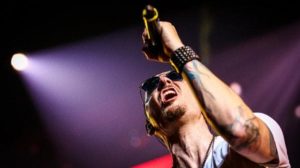 I believe, that if only we care enough to listen even if we would not be able to comprehend each other’s stories, it would make a lot of difference in all of our lives. And who knows while listening, you might form the real bond something that would be cherished by you.

So next time whenever you come across a person with a story, listen intently and that might be small tribute to Chester Charles Bennington.