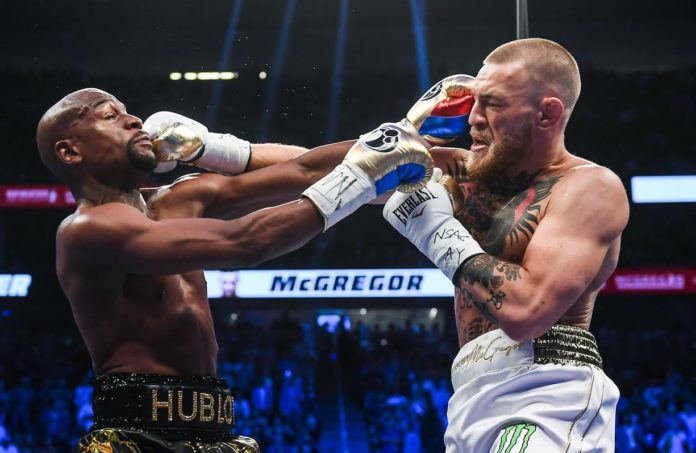 The weakest box office weekend of the year left the door open for the presentation of the much-anticipated boxing match between Floyd Mayweather and Conor McGregor to crack the top ten domestically.

One of the most-buzzed about sporting events of the year (or history, depending on who you ask), the big bout between undefeated champion Floyd Mayweather and MMA star Conor McGregor went down in Las Vegas on Saturday night. Millions of viewers around the world watched as Mayweather defeated McGregor by TKO in 10 rounds, deemed by many a satisfying conclusion to a massively hyped fight. The numbers for just how big the fight was are starting to roll in, and they speak volumes both to the size of the event and the current state of the movie industry.

Preying on a paltry slate of new releases in theaters, premium theater showcasing company Fathom Events hosted a live telecast of the fight from 481 locations. According to Deadline, the gamble paid dividends, as the fight took in $2.4 million on Saturday night. Now on many other weekends, this would most likely put the event on the fringe of the top 10, but given the lack of appealing options for moviegoers right now, that total will place ninth on the list. Not only that, but Mayweather-McGregor was the third biggest draw to theaters on Saturday night, topped by only The Hitman’s Bodyguard and Annabelle: Creation.

There are a lot of caveats that must be made before overwhelmingly celebrating the success of this endeavor. For one thing, ticketing to watch the fight was inflated compared to an average ticket price for a general Saturday night admission, which is already expensive on its own. Also, the lack of competition plays a key factor in how high the fight could climb the list.

For reference, Mayweather-McGregor total well tops the PPV total of the fight between Mayweather and Canelo Alvarez, which took in $1 million in September of 2013. The weekend of that fight, new releases were the horror sequel Insidious: Chapter 2 and Robert DeNiro action-comedy The Family, as Insidious took home a healthy $40 million. Mayweather and his fight against Manny Pacquiao went up against an even bigger weekend, taking on the debut of Avengers: Age of Ultron in May of 2015. This weekend, on the other hand, will take in the worst combined total for the box office in almost 15 years, leaving the door open for this massive fight to take advantage.

As with any sort of scheduling of a major event, whether it be a sporting event or a movie’s release, context and timing is key. It’s almost guaranteed that the Mayweather and McGregor camps when negotiating the scheduling of this fight looked at the projected movie release slate and granted, an event this size was going to do huge business regardless (final worldwide totals for PPV are coming in over a billion dollars) but the fighters probably wanted to maximize those profits by avoiding a Wonder Woman or Spider-Man: Homecoming in the thick of the summer movie season.