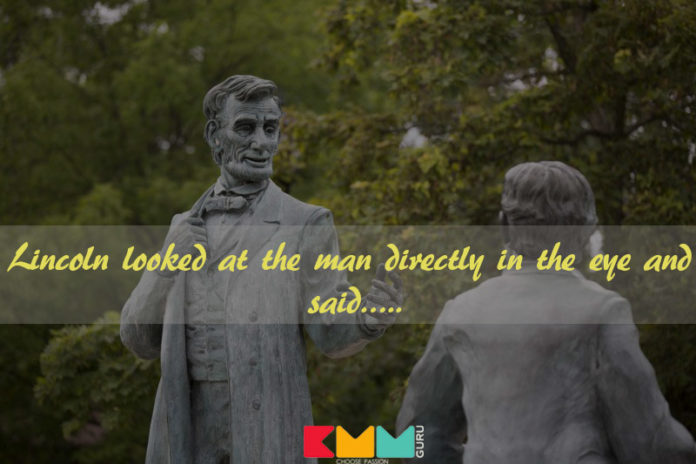 Abraham Lincoln was the 16th President of the United States. He served from March 1861 until his assassination in April 1865. Lincoln successfully led the United States through it’s the darkest hour … the American Civil War. In the end, Lincoln was able to preserve the Union and end slavery. The man who always said and believed

“THE END, IT’S NOT THE YEARS IN YOUR LIFE THAT COUNT. IT’S THE LIFE IN YOUR YEARS.”

Lincoln didn’t live to a very old age, but the “life in his years” made a profound impact on the world. Are you making your years count? Are you changing the world? You’re capable of it; if you’re able to read and understand these words, then you have the ability to make a profound impact, and that’s not just meaningless  rhetoric, it’s a very real reality, but will you grasp it, will you believe it and make it “your” reality. Let me share one of his story with you.

On his first day in office as President, when Abraham Lincoln entered to give his inaugural address, one man stood up. He was a rich Aristocrat. He said, “Mr. Lincoln, you should not forget that your father used to make shoes for my family.” And the whole Senate laughed; they thought they had made a fool of Lincoln.

But certain people are made of a totally different mettle. Lincoln looked at the man directly in the eye and said, “Sir, I know that my father used to make shoes for your family, and there will be many others here. Because he made shoes the way nobody else can, he was a creator. His shoes were not just shoes; he poured his whole soul into them. I want to ask you, have you any complaint? Because I know how to make shoes myself. If you have any complaint I can make you another pair of shoes. But as far as I know, nobody has ever complained about my father’s shoes. He was a genius, a great creator and I am proud of my father”

The whole Senate was struck dumb. They could not understand what kind of man Abraham Lincoln was. He was proud because his father did his job so well that not even a single complaint had ever been heard.

“No one can hurt you without your consent.”

“It is not what happens to us that hurts us. It is our response that hurts us. Be excellent at your work, no matter how big or small it is” live your dreams to the fullest, don’t allow others to judge your capability. Be a master in what you do, Be creative in what you, Be Genius in what you do. Don’t bother about what others have and you don’t have. You have to do your own growing. It doesn’t matter whether your thought or idea can change the entire world, but if your thought or idea creates an impact In one’s life that matters. The best way to predict the future is to create the future.