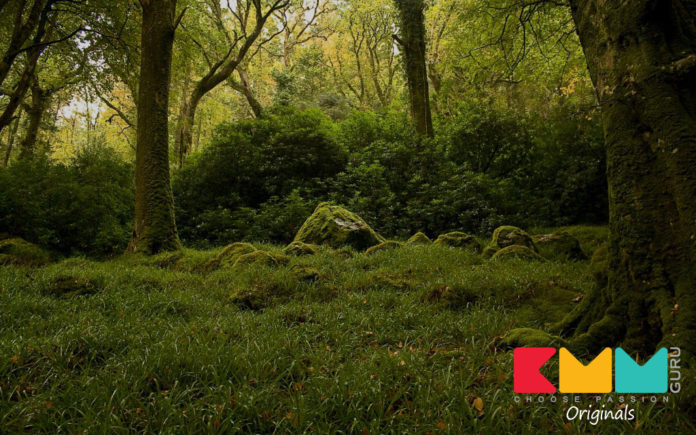 I moved slowly and with the wind as to cover the littlest of noises if there were any. Rose a bit above the leaves that shield me from whatever was on the other side and tried to look through the rest of the bush. I couldn’t clearly see what it was but it moved slowly and looked like something furry and white. It hopped holding something in its tiny paws and chewing at the same time, maybe it’s a bunny. It panicked and tried to run but was picked up by something. All I could see was grey fur and all I could hear was the rustling leaves and a squeak. A single squeak and the bunny stopped moving as something picked it up in its teeth and growled. Through the space between the leaves, I could see a giant wolf-like creature turn around the other way to maybe eat the furry little creature. I moved sideways to see it clearly and saw it stand up on all its fours. It’s a dog, one could easily mistake it for a wolf but something tells me it’s a dog and a huge one at that. It’s almost 5 times bigger than a wolf itself.

That tiny bunny wouldn’t as nearly satisfy its hunger. I sure wouldn’t want to end up in its jaws. I crawled a fair distance away from the dog till I was sure it was safe to stand up and run and did exactly that. I ran as far as I could from the bushes. After a while I reached what I believed was a safe distance, I walked around to examine the area and saw a something sparkle in the grass, there was something shiny near a tree. I walked up to it and found a pair of glasses, there must be people there somewhere. I picked up the glasses and walked further, from where I was standing I could see a few people down to a slope sitting in what seemed like a ditch or a shallow Pit. I screamed “Hey!” and waved at them but none of them responded or even turned around to look who it was, maybe they were too far away to hear me. I decided to move closer and as I started walking I realized they were indeed very far away from where I was standing before. I kept my eyes on them and walked in their direction. My pace changed and I realized I was walking down a steeper slope than before.

Those people were still a fair distance away from me. I walked patiently yet still curious about meeting people for the first time in eternity and at a place like this where time never passes, who knows what the forest holds in its trunk of secrets. They might know something, more than I do at least. I reached a fair distance now but still can’t see their faces yet, they were facing the other side, I could only see the upper half of them from behind, there are 3 of them, maybe talking or sleeping? They may be wandering like I am, but being optimistic would hurt anyone…