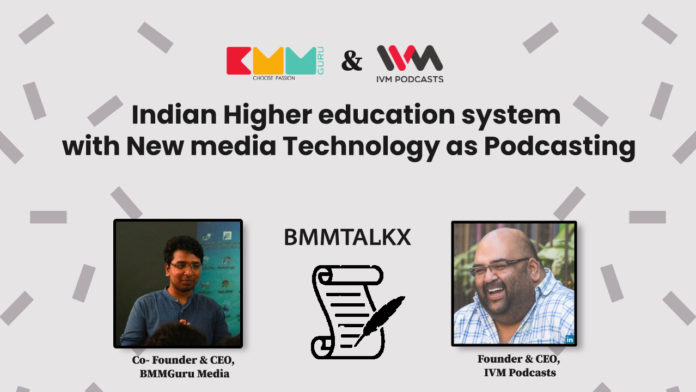 The below discussion took place as an interview with Founder and CEO Amit Doshi of IVM Podcast, IVM is one of the top quality content makers in India, especially in Podcasting. They produced more than 40 shows and their flagship shows Cyrus Says with Cyrus Brocha and The seen and the unseen by Amit Varma are listed as must listen to podcasts from India. (BuzzFeed India. 2016). Our discussion mainly involved in perspectives as a content producer, interest of their audience, market potential and value towards education in the future.

Hi Amit, How did you decide the duration of a show?

Podcasting as a art or journalism?

Do you think Podcasting is a time shift Radio or a New Media Technology?

Do you think producing podcasting is less time consuming in human efforts in comparison with on demand video and other content creation sources?

When you see evolution of podcasting, all the way from 2004 from apple, most of the content would be revolving around monolog or conversation, lets per say even after 10 years does the format works same or is any kind of further development we can see?

Do you think, if there any regulations are controlling bodies on how content is developed in near future?

What’s your perspective on audio storytelling, audio books, podcasting in upcoming future? Following that, do you think this industry will grow to have a side to side comparison with video or to grow influencers and new set of celebrities through this?

Future of podcasting in education industry?

Comments on “I personally believe, every medium has its own pace and pitch like for example a recent International incident between USA and China is an issue you want to get an updated about. You Might use twitter for instant update on topics, News Paper on a detailed analysis, Television for Intensity of the situation and experts opinion, Social media for socialites perspective and Memes may be for effective information as an abstract. Maybe a podcast for a detailed one to one conversation in an undisturbed environment”

I completely agree with that, when we look into our past and how people use to consume information was mostly visual and audio, the proper combination of these both mediums designed to print, video, and audio media. And we can expect many more things from this combination and I can say that total no of people working in this industry with me and with other companies now will be grown in multiple of thousands soon and I am optimistic about it.

My thoughts on above discussion

To add a perspective my this discussion, my brother is an assistant professor and an IAS aspirant, I forced him to try looking up or listening to podcasting. After few months, he said “ I might have consumed information I can do with 3 months of material if I would have read in 1 month by listening to it and the great thing is my brain is not cluttered. The good thing about podcasting, scientifically is we as a human being in our evolution process audio been a very effective tool of communication and it helped us understand things much faster than reading and this can be a really interesting time that we can see this concept expanding globally and reaching to different tire cities and rural region

If you are interested to work with IVM Podcasts, then there are few positions available, checkwww.bmmguru.in/careers to know more.