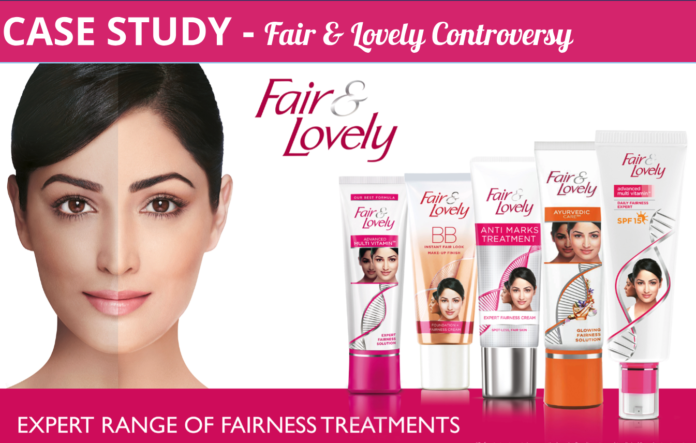 The skin-lightening cosmetic product of Hindustan Unilever Ltd, FAIR AND LOVELY came into the Indian market in 1975. The tube of Fair and lovely has its presence in many homes whether they are rich or poor, rural or urban despite the increased competition both from domestic and international brands.

The target consumer profile for Fair & Lovely is the 18 and above age group, and the bulk of the users are in the age 21–35 category.

The advertisements for the brand show the whitening effect as much as six times whiter, as a woman becomes fairer she is seen happier in the ad.

The advertisements are no doubt biased towards the darker skin and attract a fair share of controversies with people blaming that fair and lovely links beauty with fairness.

One of the Hindustan Unilever Limited research claimed that 90 per cent of Indian women want to use whitening cream because it is aspirational, like losing weight. In one of their television advertisement, actor Saif Ali Khan is seen preferring the fair-skinned Neha Dhupia over darker-skinned Priyanka Chopra, following which in a controversy the company had to suspend television advertisements for the product in 2007.

While the feminists called the ads “humiliating and ludicrous”, in order to save their market, Fair & Lovely put out a press release announcing the launch of the Foundation for the Economic Empowerment of Women with the backing of “prominent women organisations and achievers” such as Mallika Sarabhai and Dr Snehlata Deshmukh, former vice-chancellor, University of Mumbai.  And that’s how Fair and Lovely still manages to capture their share of the market.

As the experts say that no fairness cream can make one fairer but all they can do is reverse the damage done by unprotected exposure to the sun, and prevent the formation of melanin-producing cells, kill existing ones to make the skin lighter.