Not much of twists and turns made in the story.

The story revolves around 18-years-old Maddy Whittier, who has been told by her protective mom that she can never leave their hermetically sealed home because she’s been diagnosed with Severe Combined Immune Deficiency (SCID)  which makes her allergic to the world.

One day, Maddy spots new neighbors moving in next door. She sees Oliver “Olly” Bright . He looks up at Maddy’s window and smiles at her. She smiles back.

That night, Olly and his sister Kara walk over to the Whittier home to give them a bundt cake that their mom made. Dr. Whittier opens the door and politely declines the cake since it’s coming from outside. When Olly asks if Maddy is around, Dr. Whittier firmly states she’s not and then shuts the door.

Over the next few days, Olly gets Maddy’s attention from there windows. He fools around with bundt cake at first before writing his number down on the window. Maddy starts texting him and then imagines their conversation as though she were sitting in her model diner. They talk about their backgrounds.

Maddy who had never left the house always had a dream of visiting beaches and look at ocean. One afternoon, Maddy goes into her favorite room and sees that Olly taped dozens of pictures of the ocean, with a note saying that every ocean deserves to be seen by her.

Maddy writes a letter to her mother saying she will be gone. She goes over to Olly’s house and says she bought two plane tickets to Hawaii. Olly tells her to go back home for her safety, but Maddy claims that she’s been taking a medication that is keeping her well for now. Convinced, Olly drives them both to the airport.

Maddy and Olly make it to Hawaii.The next day, Maddy gets sick and she passes out. Olly takes her to the hospital, and Maddy wakes up back home. Dr. Whittier is not angry, because she feels that Maddy has learned her lesson from this experience. Maddy is then forced to cut Olly out of her life, feeling it is best for both of them to stop seeing each other.

Olly moves back to New York City with his mother and sister to leave his father behind for good. Maddy doesn’t get a chance to say goodbye. Later, she receives a phone call from a doctor that treated her in Hawaii. When Maddy mentions she has SCID, the doctor suggests that there is no sign of that disease in Maddy’s system. Maddy then goes through her mother’s files to find anything on SCID. Maddy asks her mom if she really is sick. She runs way from her. 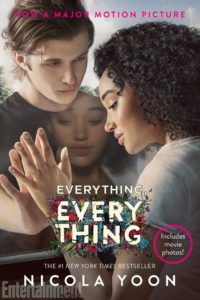 Maddy decides to go to New York City to visit Olly. She suggests that she will eventually forgive her mother.

She takes little big risks. Risk she never even dreamed of taking. And how those risk changes her life. Those risks also revealed some deep secrets.

Everything Everything is less about love and more about Risk we take.

The Greatest Risk Is Not Taking One