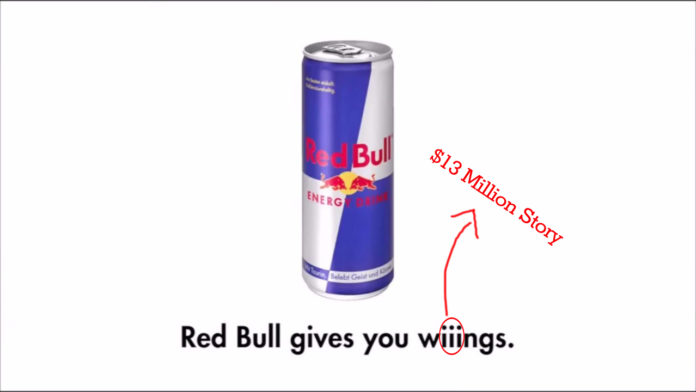 Have you ever wonder why there are 3i’s in Red bull’s caption? It’s a $13 Million story and today let’s unveil it.

Red Bull is an energy drink sold by Austrian company Red Bull GmbH, created in 1987. Red Bull has the highest market share of any energy drink in the world, with 5.387 billion cans sold in 2013.

A brand who is known for the strength turns out a can of added sugar & caffeine, this energy drink may not spontaneously make you sprout wings after all.

Red Bull’s slogan was “Gives you wings“. This was their slogan for over 20 years until one consumer, Benjamin Careathers, decided to sue the company for ‘false advertising‘, arguing that after 10 years drinking Red Bull he neither had wings nor any enhanced athletic or intellectual performance.

According to the suit, “Even though there is a lack of genuine scientific support for a claim that Red Bull branded energy drinks provide any more benefit to a consumer than a cup of coffee, the Red Bull defendants persistently and pervasively market their product as a superior source of ‘energy’ worthy of a premium price over a cup of coffee or other sources of caffeine.”

If the settlement is approved, anyone who bought at least one can of Red Bull in the past 10 years be reimbursed.

That would put Red Bull down $7.4 million in a matter of days, according to the Consumerist.

The plaintiffs are set to receive $11.40 approximately in reimbursement or two free Red Bull products.

According to consumer court documents filed in New York Federal Court, Europe-based energy drink company Red Bull has agreed to pay out up to $13 million US in compensation to settle a class-action suit launched by an upset customer Benjamin who says the company uses false advertising to promote its product.

The brand has also agreed to change its advertising tactics. As the tagline is a very famous and catchy now they made a slight change in their tagline, they added 2 more ii’s to their wings so, technically this word is not in the dictionary nor can be used for exact meaning for a wing but will sound similar.

So they started a new campaign with 3i’s in red bull.

Now you know it, why there are 3i’s in red bull.

For more this kind of articles, subscribe to us & we will notify all our new update.