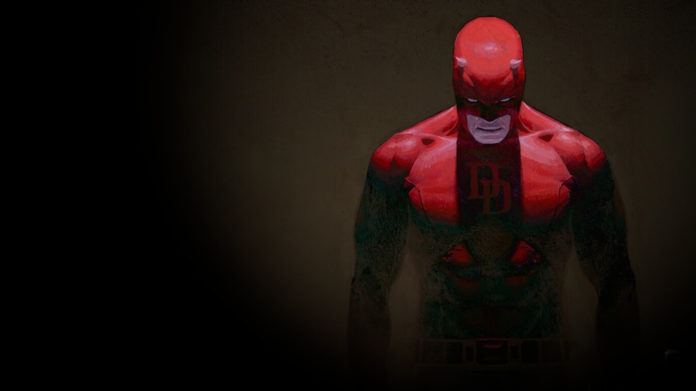 WHEN YOU ARE RAISED IN HELLS KITCHEN YOU’RE BOUND TO HAVE A LITTLE DEVIL IN YA.

As with most comic book characters there are often re-imagining and different versions to a characters past. We have chosen to primarily follow the storyline which unfolded in 1993’s “Daredevil the man without fear number 1 to 5. 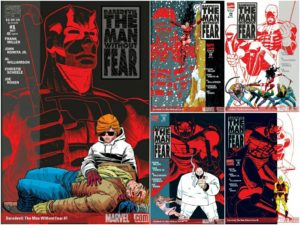 As readers learned in daredevil no.1 the acrobatic vigilante known as daredevil was matt Murdock the son of a small time boxer.

When he was young matt saw a truck about to about to hit an old man crossing the street. Matt dove in front of the truck pushing the old man safely out-of-the-way. In the chaos the chemicals from the truck spilled out into matt causing him to go blind.

However, those chemicals gave him heightened senses which more than compensated from lack of sight learning braille, he continued to go to school and started on to the path towards law school also meeting foggy nelson a man who go on to become his best friend. 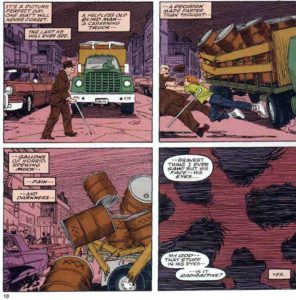 Daredevil’s origin was expended upon years later in 1993’s daredevil the man without fear, audience are introduced to many aspects of DEDE’s back story which will go on to become staples of the character.

Having been raised in hells kitchen mates early life was very difficult, matt father jack was second-rate prize-fighter who was forced to become a strong-arm man to a crook named fixer. This ultra-bad dude threatened to kill matt if jack didn’t do what he said, jack only wanted his son to get out of hells kitchen, he made matt promise to do well in school and to not fight telling in to ignore the ironic taunts of daredevil from his schoolmates. 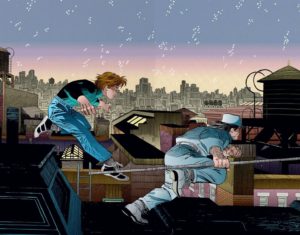 In this story we also learned matt’s heightened were discovered by a mysterious man named stick. Stick began to train matt whose skills and abilities expended exponentially while matt father jack had seen a resurgence in his career, in the ring he was on his way of becoming a potential champ unfortunately the fixer was responsible for his career comeback having secretly rigged many of the matches leading to the championship fight, he demanded that jack to throw (loose) the big fight when jack refused the fixer man-made him pay with his life. 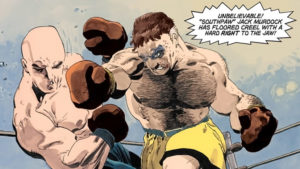 Matt hunting down father’s killer beating four of them to the pulp and scarring the fixer so bad that he died of a heart attack, when he attempted to catch the last killer matt accidentally pushed a woman from the window letting her fall to her death, stick disgusted by this abandoned matt he also matt and one other person were the only adept of this age and that other person has already chosen a path of evil to follow.

After few years in the law school matt met that other person a fascinating young women named ELECTRA the daughter of a wealthy man with connections. She became as drawn to matt as he was to her and the relationship developed. 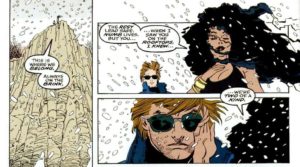 But electra had a very dark side and stick returned to tell matt about her, that didn’t matter in the end as electra broke things off of her own accord to keep matt safe, she had started to develop genuine feeling for him.

At the same time things were getting a lot worse in hells kitchen, a vile ruthless leader known as the kingpin had taken over stopping at nothing to boost his profits including child slavery.

Now a promising lawyer matt paid a visit to his old neighbourhood and discovered a teenager named mickey living in his father’s abandoned gym, they developed a friendship and when mickey was kidnapped by an associate of kingpin matt went after them having continued to develop his senses he was able to track her and rescue her, laying waste to the kingpin’s number 1 assassin along the way.

After the adventure matt knew his place was back in hells kitchen, he and his law school mate foggy nelson set up an office in the neighbourhood and stick even gave him blessings.