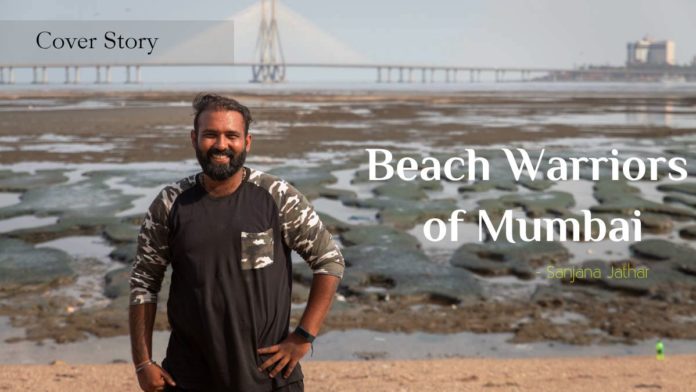 Quitting a much ambitious job to save the city is an action of guts. Setting an example of public awareness and social work, Chinu Kwatra is the guy every Mumbai should be proud of today. The morning of 17th of July happened with articles about India’s first 24hrs beach cleanup campaign in every newspaper. With up to 1500 volunteers led by Chinu Kwatra and in association with MCGM, a whopping 200 tonnes of garbage was cleared from the Dadar beach.

Life was quite favorable within the walled Air conditioned premises and soft chair to sit in for the entire day, but Kwatra had another plan altogether.
Ditching this lifestyle, he exposed himself out from this air-conditioned ambiance to a buffet of garbage.
Wet garbage, dry garbage, smelly garbage, rotten garbage, household garbage, drainage garbage, human and animal waste garbage, basically toxic waste extending acres from all sides.

Let us updated you since the day-one of Chinu’s journey. The resident of Thane, Chinu always looked towards working in education and hygiene sectors. Thus, despite already working as a marketing professional, he added wings to his vision as he started with his own NGO- Aarna Foundation along with his cousin- Shweta Saroj.

While Chinu’s year began on a high note with the foundation of his NGO, his life hit him miserably as Chinu found himself suffering from depression and attempting multiple suicides after the demise of a dear one. But in the nick of time, abandoning his luxurious job, Chinu slowly dragged himself out to a stable life as he began teaching and conducting activities with school kids by September 2017.

Chinu, a devotee of lord Ganesha went to the Dadar beach to witness the Ganesh idol immersion during Ganesh chaturthi. But the heart-wrenching sight of about a hundred broken idols washing back to the shore, post the festival, transformed this ‘EDUCATION DRIVE’ to a ‘CLEAN UP DRIVE’. Kwatra initiated teams and even approached BMC for his ‘SAVE THE GANESHA’ campaign which soon turned into ‘SAVE THE BEACH’ campaign.

Inspired by the Versova cleanup mission, Kwatra began to invite volunteers with an aim to embellish the Dadar beach all over again. To convert it from a stay for drug intakers and drunkards to a place of awe for the tourist. Students from colleges like Sathye College, Swami Vivekanand college and NSS joined hands for this mammoth task.

Despite the Mumbai cyclone, the team disposed about 90 tons of garbage in 15 weeks, expanding the number of Volunteer to 90, and 10 tons garbage per day. Without JCBs, and digging equipment, the volunteers handpicked every bit of garbage, keeping aside, health and expectations for credit. Chinu reached to large corporates to fund for streetlights, toilets and other renovation works as part of their CSR, further boosting the local economy.

Kwatra dreams of a garbage free, clean Dadar beach, beautified enough for the passers-by to stop a moment there, clicking photos on their camera phones or just stay back for a good air to breath and amaze at sight of the iconic Bandra Worli Sea-link of the city.

Versova beach cleanup was world’s largest beach cleanup up the mission and just a prominent inspiration for the Dadar cleanup campaign. The boon of this mission wasn’t just clean and garbage free beaches but while the work took place, it also put many regular pedestrians to shame, hitting them straight with guilt when the people came to throw domestic garbage as a daily habit. The resident of Dadar, Ravi Jadhav, just into the same habit came at the Dadar beach to trash the flower waste when the team asked him to show mercy on the beach. Without a word he walked away, he knew he was committing a mistake. The mission accomplished it’s half goal, to poke awareness among the residents making sure there is no littering all over again when the beach is cleaned up well.

People like Chinu Kwatra are an extraordinary example to teach the residents that there is no point to wait for the Municipal corporation to come with dumpers. We need to leave the house with a broom and gloves, begin right from our own room and be responsible towards sanitation of our own vicinity. Mumbai needs more hero’s like Chinu Kwatra to let Mumbai remain the Financial capital and not the trash capital of India.

To read more such interesting articles, subscribe to our weekly magazine: https://www.magzter.com/IN/BMMGuru-Media/BMMGuru-Weekly/Entertainment/