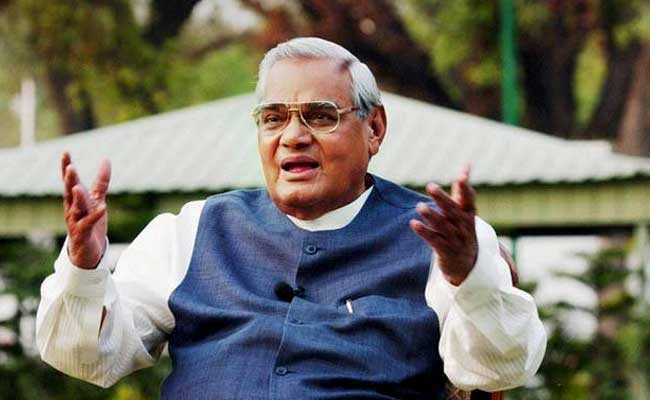 Late Atal Bihari Vajpayee (25 December 1924 – 16 August 2018) was one amongst the people who don’t need an introduction. An Indian Politician and India’s former Prime Minister who served our country, not once or twice but thrice. From his first term for a period of 13 days in 1996, then for a period of eleven months from 1998 to 1999, to a full term from 1999 to 2004, and finally retiring in 2009 from active politics due to health concerns, he was a man that India needed. From being a Padma Vibhushan awardee, he is also a recipient of India’s highest civilian honour, the Bharat Ratna.

He has also served India as the Minister of External Affairs in the cabinet of Prime Minister Morarji Desai. As foreign minister, Vajpayee became the first person in 1977 to deliver a speech to the United Nations General Assembly in Hindi. Not to forget he was also one of the founding members of the erstwhile Bharatiya Jana Sangh which he also headed from 1968 to 1972.

The Modi government declared in 2014 that his birthday, 25 December, would be marked as Good Governance Day. He died on 16 August 2018 due to age-related illness at the age of 93.

He was the leader of the pro-Hindu Bharatiya Janata Party (BJP). After his previous party, the Janata government collapsed, he restructured the Jana Sangh into the Bharatiya Janata Party in 1980 and became the first Prime Minister who was not a member of the Indian National Congress party to have served a full five-year term in office.

He was a member of the Indian Parliament for over a period of four decades, having elected ten times from The Lower House, Lok Sabha and twice from the Upper House, The Rajya Sabha.

He was one of the few Hindu leaders to speak out against the destruction of the historic mosque at Ayodhya by anti-Muslim extremists in 1992.

In 1942, Vajpayee, who was only 16 years old was arrested for 24 days during the Quit India Movement with his brother for being an active member of the Rashtriya Swayamsevak Sangh (RSS).

Some of his important political career decisions that made India grow and stand neck to neck with the rest of the countries in the world were:

Pokhran 2 (1998), where India carried out nuclear tests and stunned the world, defying subsequent US sanctions under PM Vajpayee.

Ride to Lahore (Feb 1999), where Vajpayee travelled on the first ever bus service connecting India and Pakistan.

Operation Vijay (Jun-Jul 1999), where his Government decided compensation for the families of Kargil martyrs.

IC-814 Hijacking (Dec 1999), where he had to release three terrorists to secure the passengers on the aircraft hijacked from Kathmandu and taken to Kandahar.

After the 2001 attack on the Parliament, Vajpayee ordered a mobilisation of India’s military forces, and as many as 500,000 servicemen amassed along the international boundary bordering Punjab, Rajasthan, Gujarat and Kashmir. With Pakistan responding with the same, both the countries remained perilously close to a terrible war. The war ended fearing a possible Nuclear Exchange.

In 2002 his government was criticized for its deliberate slowness in reacting to riots in Gujarat in which some 1,000 people (primarily Muslims) died. Nevertheless, in 2003 he made a concerted effort to resolve India’s long-running feud with Pakistan over the Kashmir region.

Vajpayee and Musharraf met in Islamabad on the sidelines of a SAARC summit (2004), where Musharaf finally agreed to not allow terrorists to use “territory under Pakistan’s control” to act against India.

Vajpayee remained a bachelor his entire life, he adopted the daughter of a long-time friend Rajkumari Kaul and BN Kaul and raised her as her own. He has also authored several works of both prose and poetry, Meri Sansadiya Yatra, Meri Ekyavan Kavitayen, Four Decades in Parliament and New Dimensions of India’s Foreign Policy being amongst his best works.