HE MAY BE THE CLOWN PRINCE OF CRIME, BUT THIS VILLAIN HAS TO BE TAKEN SERIOUSLY.

The joker may be Batman’s most famous enemey however only few people can piece together the background of this criminal mastermind.
As there is no official history for the joker, we have decided to follow the most widely believed account from the comic book “THE KILLING JOKE” published in 1988. 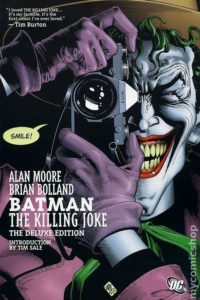 The joker background is so clouded that it seems to stay mystery even to himself. the joker himself once admitted, “Sometimes i remember it one way sometimes another, if I’m going to have a past , i prefer it to be multiple choice.”
The killing joke introduces the joker as a one time Engineer who worked for a chemical company nameless in the comic book, we learned that the engineer quit his job to pursue a stand up comedy career , after failing miserably at comedy and with a pregnant wife at home, the unnamed man agreed to help two criminals break into his old chemical plant only to be pressured by the criminals. The two criminals force the engineer to wear the red mask as the leader on the crime group. 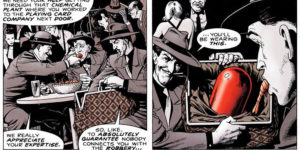 At the chemical plant the two men are gunned down and the engineer is confronted by batman in trying to escape the engineer jumps into a vat of toxic waste after being swept through a pipe and out of the plant, the engineer then discovers that his skin have been permanently bleached chalk-white, his lips have been stained red and his hair had been dyed green.
The event of that day are enough to drive the engineer insane and turn him into Batman’s greatest enemy “THE JOKER” a sociopathic criminal, whose sole reason for causing havoc on Gotham city often seems to be simply to entertain himself.